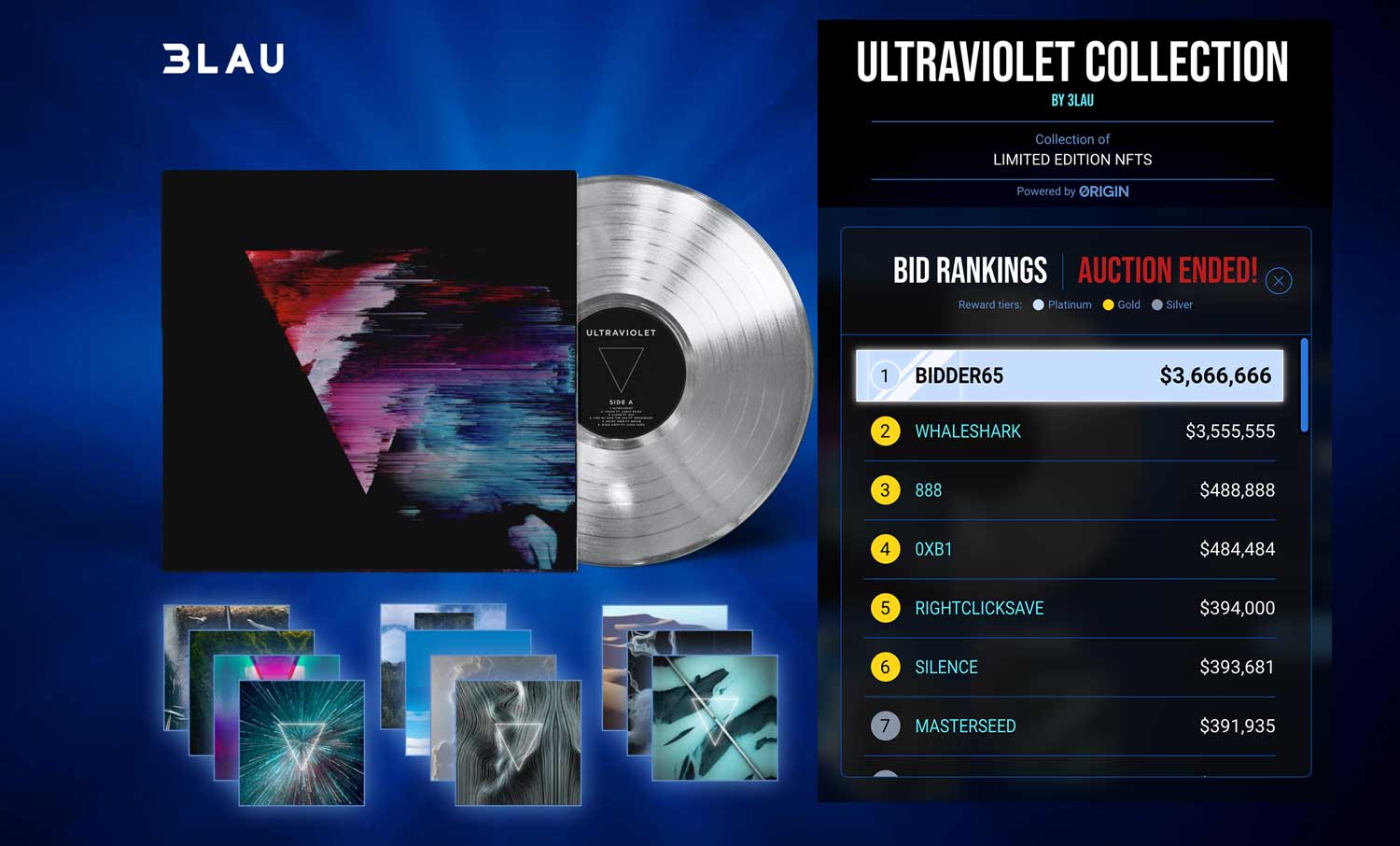 Last night, DJ/producer, and crypto-artist 3LAU, made history by auctioning 33 unique NFTs as part of his ULTRAVIOLET COLLECTION for a record amount of $11.7 Million. For a few different reasons which I will get into below, I feel that the music industry was fundamentally changed in just a few hours last night and we will all be the beneficiaries of this epic moment.

First of all, for those that have not yet heard about NFTs, on a very basic level, it is a way to create unique digital items that are authenticated on the blockchain. This can range from collectibles, art, music, and even physical works. There is a lot of info out on the interwebs and I suggest you start researching at your own pace. The NFT bible is a great place to get a primer. There are also many rooms in the Clubhouse app where artists are discussing NFTs 24/7. Do not get daunted by the technical jargon and focus on the creative possibilities first.

The way 3LAU structured his auction was very cutting edge and the mechanics of the auction should be noted. There were 33 available winning slots in total for the auction. Slot #1 was the Platinum Tier, slots #2 – 6 was for the Gold Tier, and slots #7 – 33 was the Silver Tier. Each tier contained digital artwork, music, and physical goods (Vinyl) connected with the project. The winner of the Platinum Tier also won a custom song created by 3LAU with the winner’s creative direction, tokenized as a 1 of 1 NFT.

The auction brought in some of the most distinguished collectors in the NFT space as well as some anonymous bidders. The top slot went to an anonymous bidder for $3,666,666 and the #2 slot was won by Whaleshark for $3,555,555. Whaleshark is a legend in the NFT space and his Whale Community owns the largest NFT collection in existence. The most interesting aspect of the mechanics of the auction was that instead of just 1 winner there were 33. And though the auction had a time limit – it was automatically extended by 3 minutes if a new bid came in. 3LAU mentioned that he got the idea for this type of auction from being in a club that had a big screen with a leaderboard that showed people that ordered the most champagne bottles. This created incredible excitement around the bidding as people were watching it unfold live.

Another aspect of the auction worth noting is that during the bidding last night, 3LAU hosted a room on Clubhouse with members of his team and even some of the bidders. This incredible look behind the curtain as everything was unfolding live was absolutely fascinating and will be a model for community building and marketing moving forward.

Aside from the hype around the amount of money that 3LAU was able to generate from the auction, what was even more profound is that this was all done by an independent artist. There was no major label or brand involved in this project. He was able to create record-setting album sales in one night by being innovative and putting together a supportive team of creatives and technologists and in doing so, created a template for artists moving forward.

As everyone is rushing in to try to learn and capitalize on the NFT craze, we should really take a moment to breathe and fundamentally understand how this technology has the ability to open doors for artists to create, market, and sell their work directly to their communities as a self-sovereign individual. It is quite profound.

We will be highlighting NFT artists here on Trend & Chaos moving forward and have some exciting announcements in the NFT space coming soon, so if you are doing something interesting in the space – get in touch!